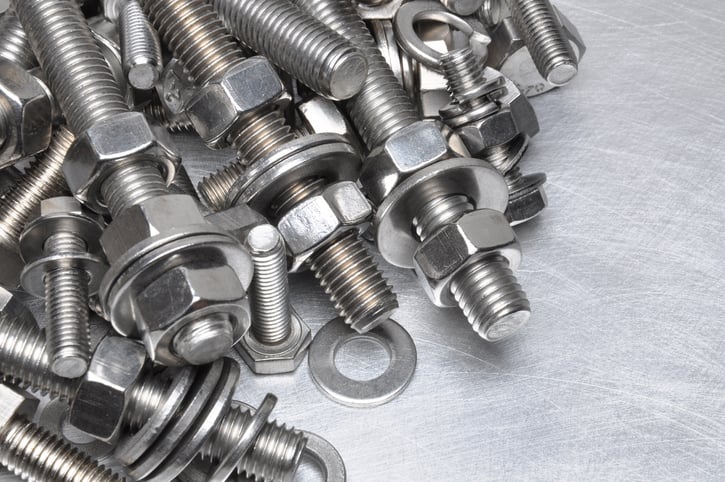 This Is What Makes Metric Bolts and Standard Bolts Unique

For as long as anyone can remember, man has had measurements for everything from distance to weight. Sizes have since evolved in different countries using different measuring systems. Most of the world uses the metric system, while the U.S. predominantly uses the Standard (or, for the rest of the world, Imperial) system.

Standard bolts are manufactured in the United States using the imperial measuring system. Unified National coarse and fine threads are the most commonly used bolt types in the industry.

And when you’re measuring standard bolts, screws, and nuts you typically use three things:

The higher the thread count, the finer the threads, because the bolt has more threads squeezed into the small space.

To ensure you’re using a metric bolt, look for the letter “M” and the number which identifies the diameter of the shaft.

The International Standards Organization or ISO will stamp the bolt head with "ISO M" or just an "M.” It all depends on its diameter. The stamp certifies that it meets ISO standards. A single-digit number may be engraved on a flat-hexagonal bolt, indicating its strength. Some manufacturers will stamp the grade strength and "M".

Metric fasteners are measured by length and pitch (distance between their threads), and the greater the bolt's pitch, the more space between the threads.

How To Tell the Difference

Experienced engineers who handle these types of fasteners every day can easily tell the difference between a metric and a standard bolt. The differences may be very subtle, but the consequences of getting the bolts wrong are dire. Forcing a standard bolt into metric nut strips one or both compromises the integrity of the fastener connection. A standard wrench on a metric bolt rounds its head, rendering it useless.

As a rule of thumb, you should never force a fastener into place as this causes cross-threading. Before you start working, confirm you have the right tools. Some fasteners, as mentioned earlier, have specifications embossed on them.

Always confirm which bolt you have before your project. It is not easy to tell whether a bolt is standard or metric unless you know what to look for.

Big Bolt manufactures and supplies all types of fasteners in the U.S. and worldwide. If what you need is missing from our inventory, we can thread it on-site and deliver it to your project site.

Contact us for a quote or if you need more information on the best fasteners for your project.

What's The Difference Between Tap Bolts And Structural Bolts?

Tap bolts and structural bolts are considered to be quality fasteners. They’ve been used in the equipment assembly industry for years, but...

What Are Shoulder Bolts Used For?

Shoulder bolts are popular machine screws with an unthreaded shoulder under the head, more prominent in diameter than the threads. They are...

How To Cut Threaded Bolts

You don’t have to know how to cut threaded bolts when working on a project, but it often helps to know someone who can.