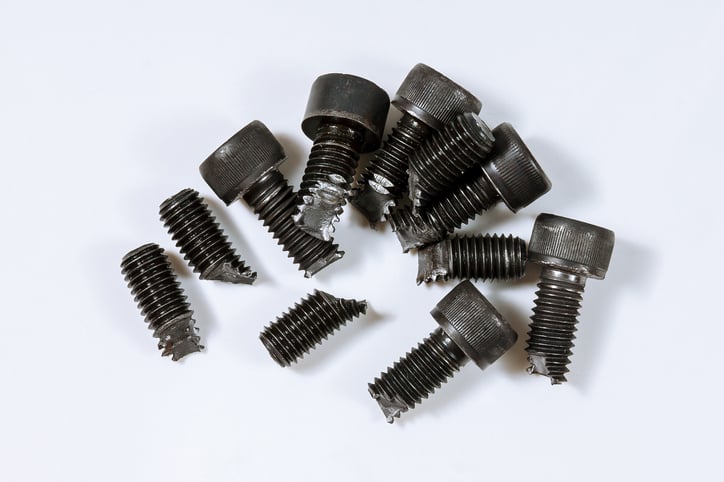 Bolted joints play a significant role in ensuring the safe operation of various equipment. That’s why it is important to understand the causes of bolt tension failure.

Bolt tension failure is not uncommon in a bolted joint. The nuts, holding it in place, often stretch the bolt slightly. This stretch or tension generates an opposing clamp force that firmly holds the sections in contact.

If the bolts fail, the clamping force weakens, and the jointed sections may loosen. The failed bolt tension becomes an irritating nuisance. If not tightened or replaced immediately, the entire joint may fail, resulting in minor to catastrophic accidents.

So, let’s take a closer look at four causes of bolt tension failure that can happen independently or in combination with other factors.

Hydrogen embrittlement is a severe type of failure. It occurs after torquing the bolt—sometimes even without symptoms.

The root cause of this failure is greatly attributed to the electroplating process. During plating and pickling processes, the metal can entrap hydrogen from water, which, if not correctly baked, may cause cracking. In rare cases, hydrogen may also get into the metal during its service through corrosion.

Hydrogen damage can be diagnosed by evaluating the metallurgical conditions, laboratory testing, or examining the fracture surface of the bolt. For this damage to occur, there are three possible predisposing factors that may occur in combination or separately:

The only positive element to avoid this issue should occur before the materials are exposed to the field. The bolts should be baked to remove potential hydrogen before the plating process is over.

This type of failure is similar to hydrogen embrittlement, except that its symptoms appear between 24 hours and two months of torque. The corrosion occurs when a bolt is exposed to corrosive agents such as sulfur-based compounds, caustics, and ammonia, which cause gradual cracking and eventually failure.

The basic methods used to diagnose this bolt tension failure are examinations using optical microscopes and lab analysis using energy dispersive spectroscopy to determine the specific agents responsible for cracking. You can also do routine torque checks to confirm whether the metal has potential failure symptoms.

If you can’t avoid these predisposing factors, a change or redesign of the material type may be necessary to prevent future failures.

Shear or ductile failure can occur due to:

The diagnosis of this type of bolt tension failure can be done through visual inspection if someone knows the exact signs of failure. Once diagnosed, review the geometrics of the bolt or nut, the installation procedures, and the amount of loading during failure. Lab-based analysis or consultation with professionals may be necessary for a novice before the joint becomes a total mess.

Fatigue failure is the most common type of bolt tension failure. It mainly occurs when:

The primary method of diagnosing this failure is examining the possible surface fracture through visual identification. Lab analysis may also be necessary, especially for beginners, to avoid fatigue and time wastage of chasing the wrong issues.

You Need A Fastener Supplier You Can Trust

Fasteners may fail for various reasons, some with visible signs and others without. Different failures also require different diagnoses depending on the failure analysis. However, the first step in ensuring the safety of the bolted joints starts with the application of quality fasteners from a reputable source.

At Big Bolt, we never gamble with quality. We manufacture varied high-quality bolts and nuts for different industries across the world. We are equipped to customize and rush manufacture to meet your specific needs within your timeframe. Contact us today.

What Are Some Of The Most Common Causes of Bolt Failures

An accident at one of the most popular amusement parks in the world is forcing many people in the fastener industry to take a long, hard...

What Causes The Shearing Failure Of Bolts?

The shearing failure of bolts is complicated but important to understand. Bolts will fail when shear stress supersedes shear strength,...

What Causes The Failure Of Bolted Joints?

The failure of bolted joints can be a significant concern for engineers. They frequently assess whether a joint can withstand the pressure...